"The health of the eye seems to demand the horizon.  We are never tired so long as we can see far enough."  Ralph Waldo Emerson

After a great time in Ohrid, we said our final goodbyes to the city and started the trek to Skopje.  We decided to go away from the main road and instead through the far western part of Macedonia. Driving through Mavrovo National Park, Debar and Gostivar allowed us to experience a bit of Macedonia I had never seen.
However, before I show you that journey I want to share some of the photos Landon took around Ohrid:
Heading out of Ohrid, we were excited to see the new sights as our official family vacation began.  I hadn't felt like I was on vacation in Ohrid, simply because I was playing host and tour guide.  That all changed once we were on the road and I was ready to get going or so I thought.  Since it's been years since I've been on a road trip with my brother I quickly learned that a road trip to him means stopping every sixteen seconds to take a picture.  Then once we stopped he would disappear around a tree, down a cliff or around the bend.  I couldn't get over how fast he disappeared! It was like he put on some sort of photographers invisibility cloak. However, he did get some great pictures and we learned to only allow three stops per drive. Ohhh family time.


Debar is a fascinating little town and has been around since the days of Ptolemy.  It's been controlled by Tsar Samuil, Albania (the Christian one), the Byzantines, the Ottomans, modern Albania and of course Yugoslavia.  Today it reflects that history in the architecture and feels much more Albanian than Macedonian.  Both groups of people live together quite well and I was impressed with it's cleanliness and hospitality.


After leaving Debar we passed through Mavrovo National Park.  It's one of Macedonia's must see for Nature lovers and was stunning to drive through.  There are plenty of wild animals there that cannot live anywhere else including wolves, bears, deer and boar.

As we moved along from the park into Skopje I realized that I wasn't used to sitting in a car for hours. I was used to being on a bus, when no one talked to me and we went along without stopping.  On that day, that wasn't happening.  Landon really wanted a picture of everything, Mom and Gary were chatting up each other up and I realized I was going to have to get out of my Peace Corps solitary travel mode and into family travel mode.  I'm glad that I realized that so quickly because it made the rest of the trip a great one but I was a bit grumpy for those first few hours. (I've asked other PCV's if they've felt the same when people visited and all agreed they had).

Once we were settled into our hotel in Skopje, we decided to beat the heat with a walk around the center and find some dinner. I'm going to condense our two days there but if you'd like a more thorough examination of the city click here.  Skopje is a prime example of how the Balkans are a cultural and historical crossroads not only in space but in time. It's lively, contradictory, a political hotspot but affordable to most.  Also, it was nearly destroyed by an earthquake on July 27, 1963.  Much of it's modernist-brutalist architecture was built after that and wasn't designed with much forethought.  Thus it's a kaleidoscope of different architectural and cultural periods circulating together. 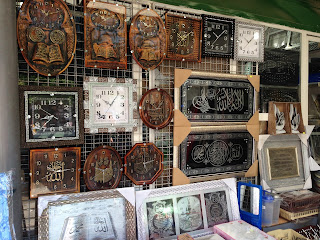 Sitting there in the hot, humid air enjoying our desserts at K8, the call to prayer floated over the city signaling the end of worship and the beginning of the evening's festivities.  As we listened to a tradition older than any other in our country we slowly soaked in that unique sound.  After it ended we sat in silence, finishing our Western desserts.  Then, we looked at one another knowing our Macedonian trip had come to a close.  Pushing our chairs away, we walked into that Turkish night ready to travel to a place none of us had seen but all had dreamed of.  Finally, we would gaze upon what so much of our Western architecture, history, literature and philosophy was inspired by:  The Ancient Greeks of Athens.