First, thank you all again for the birthday love.  I feel really good about being 30, perhaps it's because of the example some friends and family have made but I find it exciting. It feels good to close the chapter on my 20's and be ready for the next one of my 30's. I know that I only want more of what I already have.

I had a great birthday and traveled to Belgrade, Serbia with five other PC Volunteers who had their birthday in the previous four weeks.  We visited Tito's grave, who I learned a lot about, Yugoslavia's history and it's role during the Cold War.  Belgrade itself is an amazing city and is the most Western Balkan city I've visited.  You can tell it's always been an important city due to the Hapsburgs influence, large roads, many forts and of course the Danube running right through it. It's vibrant, organized, complicated and the people are motivated.

People here in the Balkans have strong emotions concerning Tito which causes him to be remembered differently by people within each former country of Yugoslavia. Some remember him as a great source of Balkan pride and economic success, others as a brutal dictator who murdered thousands. History, as always, is reinterpreted with each generation.  He brilliantly used the Cold War to his advantage and  politically maneuvered himself to be independent of both the Soviet and Western bloc.  My favorite story about Tito is how Stalin attempted to assassinate him several times but failed.  After the last failed effort Tito sent a messenger to Stalin saying he only needed one attempt to kill Stalin.  No other assassination attempts by Stalin were made.

Next, we headed across town to check out one of the largest Greek Orthodox churches in the world, St. Sava Cathedral.  It's truly massive but the interior is incomplete.  Walking up to it I felt the grandness but also it's warmth.  The grounds surrounding it are lush, open and quiet despite being in the center of town. 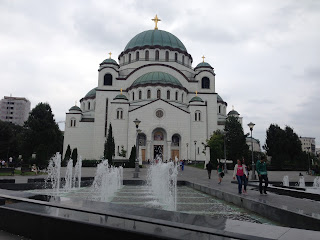 Walking inside, I was surprised how how unfinished the interior is.  The Cathedral was built in honor of the first Archbishop of Serbia, who is buried underneath the structure.  Construction has taken decades to complete due to lack of funds, government change or war. 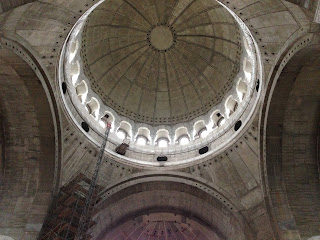 Afterwards, we headed back to freshen up and get ready for our combined birthday celebration,  at PivoFest, or BeerFest in English.  It's one of the largest festivals in the Balkans and didn't disappoint.


The following morning we went to see Belgrade Fortress.  Located at the confluence of the Danube and Sava Rivers, it's been an important military location since the Roman times.  They were the first to build a large scale military structure at that location.  From the 2nd to 18th centuries it's been build, destroyed, and rebuilt several times. It was the Austrian Empire that constructed it into its final form and I must say it's impressive.  In front of the fortress there's a large green space, called the Kalemegdan (Turkish for "fort field/square") used in the past for battle but now is a beautiful park.


Not only did we get to see a fantastic city but we also chowed down on McDonald's, KFC and Burger King. Yeah, a little sad but hey that's the most authentic American cuisine we could find.  I can't wait to return to Belgrade and discover more of it's hidden gems.

The following weekend was a bit bittersweet as dozens of PCV's gathered in Skopje to say goodbye to a volunteer who had completed her service.  She was the first of the Mak 18's, the group that came a year before I did, to COS, or Close Of Service, and was beloved by all. Peace Corps is unique since you become friends with people here while back in the States they're 2,500 miles away. Fortunately, that's what road trips are for.

There you have it, summer is over.  School started today so you'll be getting posts about my real life of working and living in my village. I'm very excited to be starting work again since I now know what to expect and the challenges involved.  Lastly, I do find myself missing home a bit since football season is starting up.  Nevertheless, knowing that just gives me more opportunities to take advantage of my home.  So during the harvest this Fall I'm going to learn how to make some apple and pumpkin pies with my host family.  My host grandfather is already harvesting his bee farm, stay tuned for those posts!
Posted by Logan Monday at 6:42 PM