The next morning we met up to another beautiful, summer day.  Mom and Gary were leisurely enjoying their coffee's while Landon was appreciating why I ride my bike versus taking the bus. We were all excited to begin the tour of Ohrid's Old Town.  Lake Ohrid is one of the oldest in the world, formed tectonically not glacially, and has had human inhabitants since around 6,000 B.C.E.  Basically people have been living at Lake Ohrid for at least 3,000 years before the Pyramids of Giza were built.  So that means Old Town is built upon layers and layers of history.
Before we explored that history some shopping had to be done. Old Town has many hand crafted shops including leather goods, woodcarving, metalworking and a paper making shop.  That shop is famous because it uses one of three working replicas of the original Gutenberg printing press. 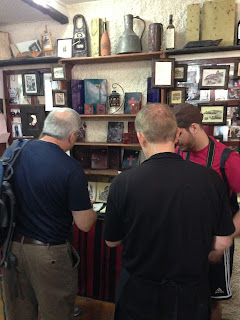 Everyone enjoyed going to the shops and only after Athens did they appreciate each shop owners laid back sales approach.


Following their shopping spree we went to Sv. Sofia, which is one of my favorite places to visit in Ohrid.  Although it's not precisely known when the original structure was built the building that you're seeing is 1,000 years old.  Follow the Turkish conquest of Ohrid it was repurposed into a Mosque. During the 1950's extensive restoration was done to remove the Muslim white washed walls and when they did, they discovered some of the best 11th Century Frescos seen in Europe. 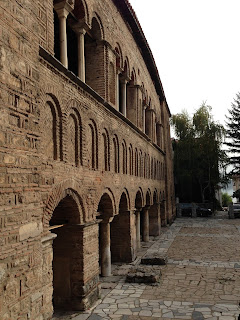 Next, we turned up the street and climbed the hill to reach the Antique Roman Theater.  Built by the Romans 2,000 years ago, it was rediscovered in the past century but wasn't fully excavated until the 1990's.  It's a gorgeous setting and one that always fires up my imagination thinking how you can be sitting where Senators once watched gladiators battle.  Now it's used for concerts and plays. 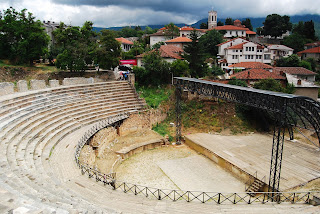 Completing our climb to the top of Ohrid we reached Tsar Samuil's Fortress. Build at the end of the 10th Century it's foundations are on top of other structures that date well into the 3rd Century B.C.E.  It's the defining structure of Ohrid and can be seen for miles around, I've enjoyed many a coffee on my porch watching the sun's first rays bounce off its stone walls. 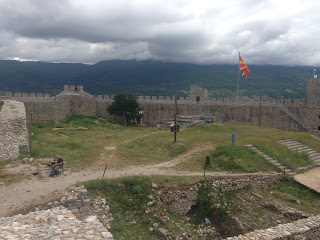 Later that afternoon everyone got together again and we had dinner at my host family's.  We had a ckara, bbq, and made s'more's.   I loved it since all of my different worlds, my American family, my Macedonian one and my counterpart were all together for a few hours.  It was a nice way to finish up our time in Ohrid. 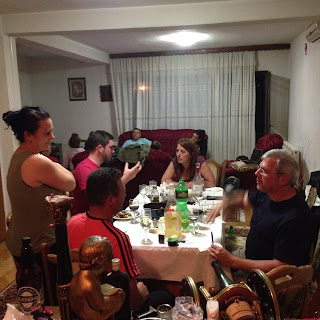 Next, I'll post our trip out of Ohrid, through Mavrovo National Park and our time in Skopje.