Sarajevo: The City Of A Thousand Sights

This trip happened because of a gift. When my counterparts daughter went to Sarajevo she gave me a bejeweled spoon. I was a bit surprised by that so I put it into my drawer and forgot about it. Once the semester started I would have my morning coffee and mix honey in it. Wouldn't you believe it but that spoon is the perfect shape for dipping out the honey and mixing it in my favorite coffee mug. While stirring my coffee I would wonder about the place that spoon had come from. I only knew that Sarajevo was the capital of Bosnia, that Archduke Frank Ferdinand had been assassinated there and it had been attacked in the mid-1990's. So I did some research and discovered it was layered in history and culture. I decided to go during my winter break over New Years Eve and told my Peace Corps friends Dave and Abby about my plans. We briefly looked into Budapest but decided on Sarajevo. I had no idea that I would discover a hidden city that's such a unique blend of Muslim history, Austro-Hungarian organization and Balkan cuisine all infused by it's citizens resilient attitude.
However, we had to get there first. We took the overnight from Skopje to Sarajevo and it was not a comfortable bus ride. Why? Well, the driver and his assistant smoked, with the windows up, for half the trip. I was in the front and couldn't escape the fumes but that's the way it goes sometimes. Yes, it was miserable until they stopped.
Yet once we got to Sarajevo we called our B&B owner, Marjam, so her son could pick us up. Props to Abby for finding our B&B because it was in the oldest part of Sarajevo, called Vratnik, with the most hospitable owners. Of course after dropping our bags off we went to Marjam's house for coffee and conversation. The first thing I noticed when I walked into their home was the smell of the house. It was nearly identical to my grandmothers in Upper East Tennessee. Looking left, my eyes landed on the Islamic lunar calendar hanging next to the kitchen. Pausing, I looked at it because how many times have I hung my own calendar in a similar spot or checked the Orthodox calendar back at my Macedonian home or walked by the Christian one in my neighbors house back in the States. Stepping into her living room I noticed all of the shelved books and framed art. As I soaked it all in for those few seconds I realized I was absentmindedly talking to Marjam in Macedonian and she could understand me. So I sat down and snapped into the present. Later her other son would come in and we all conversed in English about Sarajevo, their home, and New Years Eve plans. I instantly felt at home in such a warm and friendly place.
That night being New Years Eve we headed out to see the Bascarsija, the Turkish marketplace, wander  around, snag a bite and let the night come to us.

One thing I don't have a picture of is us in McDonald's. Now, I could try and act like we weren't excited to eat American fast food but we were. It was nice to just chow on a massive Quarter Pounder or as it's known in Europe a "Royal Burger".

The next morning while Dave and Abby slept I went and enjoyed a breakfast prepared by Marjam. We chatted a bit about New Year's Eve, walking around the center and the food I was eating. After I was finished she brought out some delicious looking sweet dates, sat them in front of me and said, "Probe"! I looked up at her in confusion before we both busted out laughing. She meant to say "try" in Bosnian, which is "пробати". Instead she said it in English and it came out as "probe". Her son's girlfriend was also in the kitchen and she laughed along with us.

I enjoyed passing by all of the craft shops, seeing the same cuisine my Macedonian town has just with a Bosanian twist. There was a Catholic church, the third largest Jewish synagogue in Europe, a mosque and an Orthodox Church all within a block of one another. I was quite impressed with the many examples of centuries of multi-ethnic and religious coexistence but also how the 92-95 siege only strengthened that attitude. 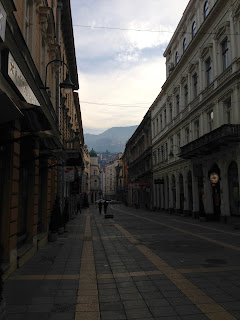 We wandered around some more heading towards the Latin Bridge. The Latin Bridge was an unassuming location to be so historically significant. It was there that Archduke Franz Ferdinand and his wife Sophia were assassinated by South Slav Nationalist Gavrilo Princip on June 28th, 1914.  The Austro-Hungarian empire quickly declared war on Serbia and then because of alliances between countries, the dominoes leading to war fell into place and the Great War began. Click here for a more detailed analysis.

All throughout my visit I was blown away by the impact of the siege. It lasted for 1,425 days, the Serbian paramilitary killed 11,000 civilians, including women and children. We went on a tour to the D-B tunnel that's under the airport. Our guide was 18 years old when he helped build the tunnel and then guarded it as a policeman. He was quite honest about his experience and how it shaped him. 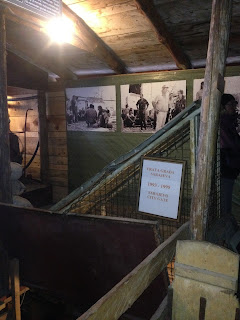 It was humbling to see the Red Roses around the city. Each one symbolized not just where a mortar shell exploded but also that a person(s) were killed by that shell. They really gave me perspective on how life was for children growing up then.  During that same time I was watching TMNT, Legends of the Hidden Temple and enjoying being outside.  They were going to school in basements, without heat, and they certainly weren't playing outside due to the snipers and landmines.


After chatting, listening and observing the people there I've come away with the understanding of how honest they are about life. They know that it's valuable and can be lost without warning. They respect that people are different from them but just focus on living amongst one another, not hating one another. They aren't going to forget the siege nor do they care if their honest descriptions of it make you feel uncomfortable. Both are lessons we too must apply back home. Erasing the realities of the past only allows for them to be recreated.
Moving on, it was a tale of two cities since a snowstorm blew in halfway through our visit. NYE was cold but crisp, the buildings and landscapes blended into the clear sky. Once it snowed everything became uniformly distinct. Each hillside home was seen, each building seemed to stand alone but none in despair but with pride.
One thing though is that everyone, everywhere smoked inside. My coat still smells like a pack of cigarettes. There's also much more to Sarajevo then what I saw.  For example, Sarajevo hosted the 1984 Winter Olympics but we weren't able to see the old bobsled course. The pictures of it are remarkable.

I went to Sarajevo not knowing what to expect and I left it filled with substantial appreciation for it. The history, culture, and people were a joy to discover.  Remember the entire idea for the trip came from a unique gift by my counterparts daughter. If she hadn't given me that spoon I don't know if I'd ever had visited such a wonderfully unique, practical, beautiful and resilient city.