Athens Part I: The Acropolis and Agora.

Sitting in the small, worn, airplane chair all I could hear in-front of me, was excited German. Next to me was a relaxed British couple chatting about their upcoming vacation.  Here I was, an American finally going to cross off one of his dream visits to Athens. The city that birthed democracy and helped inspire me to travel. Yet, I felt disjointed, unconnected to the people around me.  It wasn’t until we were all in the terminal and I stood waiting for Mom, Gary and Landon to gather their bags that I heard a noise I hadn’t heard in a long time.  It was the comforting, mid-American tourist drawl.  Turning to my left I listened to a family chat about the long plane ride over, the hot weather here and if the currency exchange booth had any Euro’s left.
In that brief moment I smiled as memories of playing soccer at my high school, walking through Nashville, listening to a street band in Austin and meeting my New York stepfamily for the first time flashed through my mind. That family brought regular, middle America back to me. The insulated Peace Corps bubble that I’d been living in for the past eight months slowly caved and popped. That family didn’t give a damn about geopolitics, learning Macedonian, or chatting with a baba at a slava. They were there together, as a family, to experience their vacation together. All the frustrations, the laughter, the created memories were to be done together. It was in that terminal that I finally accepted I too was on a family vacation.

Athens is one of those cities you have to visit.  It's a sprawling, organic, fluid city that is watched by the ancient Parthenon's gaze.  By day it's an aggressive tourist town but by night it transforms into a sophisticated European town, filled with cafe's that were hidden from the tourists daytime gaze. In the tourist center I enjoyed sitting at a cafe lazily gazing at the strolling tourists, most of whom were couples, Asian tour groups or Americans. Remember I was there in June, so if it was August or September then it would have been mostly Europeans not Americans.
For our first night Landon and I sat on our terrace and watched the sun set. It was the perfect setting to appreciate a building I'd been wanting to see since I was five. Enjoying it with my little brother, while smoking a cigar was icing on the cake.


The following morning we were all up early and on our way.  As you will see we weren't the only ones but I am glad that Nashville has a perfect replica because I was able to envision the ruins in their glory.  To think that the Parthenon was built in eight years on top of the most imposing hill in the area is inspiring. The foundation stones were laid perfectly, the columns rose majestically as if they yearned to support the absent roof once more. 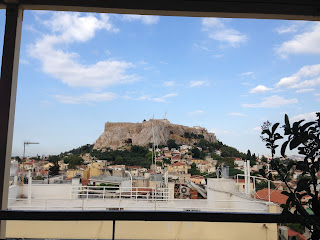 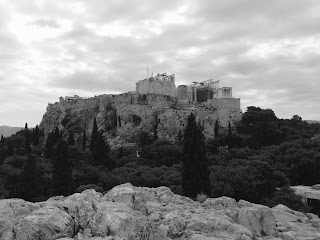 The Athenians built the Parthenon to celebrate their victory over the Persians in the 5th Century B.C.E. Standing in front of it brought a chest-thumping smile to my face. They built it because they won, because they could and it was majestic to see. Have we not done the same. It's no surprise why Europeans, and later, early Americans were so inspired by Ancient architecture, literature and history.

After visiting the Acropolis I lost the family in the crowd and figured they would venture down the hill to the Agora. The Agora is a public space for people to meet, shop, worship etc.  It was used by the Athenians and then the Romans. I had been so focused on seeing the Acropolis I'd forgotten about the Agora. It was really neat walking around and seeing the ruins of a place that for millennia had held concerts, debates, executions, shopping and worship. 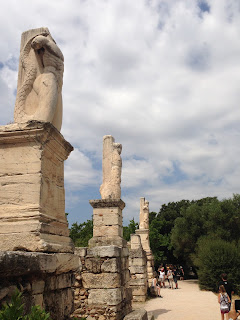 Visiting the Acropolis was a phenomenal experience that, like many millions before, I was awed by.  Nevertheless, Athens is more than it's historical monuments, it's a modern city that had delicious food to try, art to see and people to meet.  Additionally, it was the epicenter for a government in bankruptcy that was on the verge of collapse. What was it like being there days before the people voted on whether to stay in the EU or leave? That's in part II. Enjoy your weekend.