Ohrid: Jewel Of The Balkans

This past week I went out to Dolno Lakocerej, Ohrid to visit my permanent site placement.  Just as a refresher the way that works is you interview with Peace Corps staff here in Macedonia about your preferred living arrangements, the type of counterpart, co-teacher, you'd like to have and they type of place you'd like to live at.  I was candid in my answers and said that I just want a family that respects my space but wants me to be a member of their family for two years.  For my counterpart I just wanted him/her to be open-minded and to want me to be there.  Lastly, I wanted to live in a village.
The staff took my answers and found the perfect site for me.  My host family was warm, open and fun.  They're in their 30's with one son who attends my school.  My counterpart was engaging, helpful and passionate about teaching.  Her English is impeccable so we were able to be very candid to one another about our expectations for each other and how we wanted to impact the students. Philosophically we align very well and I'm looking forward to working with her.  I know we'll get on each other's nerves at times but that's to be expected and a hearty glass of humor and humility will sooth those nerves with no problem.
Moving on, Ohrid is the total package.  The lake is one of the oldest continuous lakes in the world, is the oldest in Europe and dates back to three-five million years ago.  The town has roots going back thousands of years with the earliest settlements dating from the Bronze Age (12,000-7,000BCE).  My village is near some of the archaeological sites and I'll be visiting them as soon as I can.  Ohrid also has Roman structures including a 2,000 old amphitheater that's used in today's festivals.  If you remember the picture of Tsar Samoil I took in Skopje, he's the man who built Ohrid into a fortress city and the old part has become a UNESCO heritage site.
Now, my village is nestled outside of Ohrid and is only 5-7 kilometers, 3-4 miles, from the lake.  Once I got there I couldn't believe that I would be living in a quiet village that's only a 10 minute bus ride from one of Macedonia's liveliest cities.

Just see for yourself:

After our lunch one of the other teachers met up with us and took us on a tour of the Old City.  I was in complete tourist mode but it was such a sensory overload after being in Sveti Nikola for the past two months.

The top sign says Kaneo Restaurant 10 meters. It's considered the best waterfront restaurant in the city and since Julia's friend, and our fellow teacher, knew the owners we "na gostied" with them.  Their coffee was the best I've had in Macedonia.

Following that we climbed the hill to see Tsar Samoil's fortress.  On the way we passed a new school being built.  Since this is Macedonia they were excavating as well.  Some of the deepest pits went to Roman times and beyond. 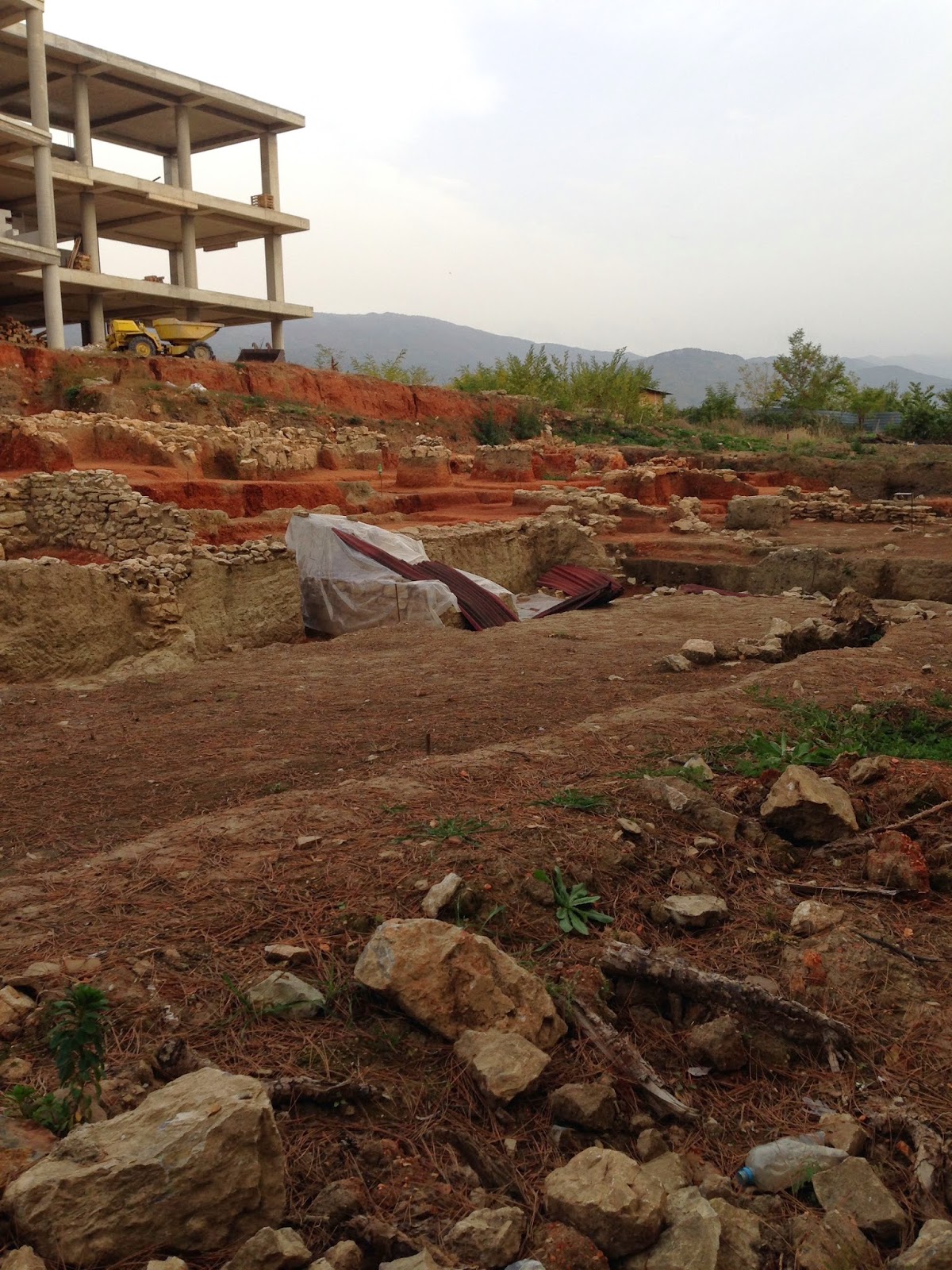 Walking down from the fortress we went to the 2,000 yr old Roman amphitheater.  It was rediscovered during a construction project in the 1960's and fully uncovered in the '90s.  It's used during the summer festivals.  Of course two of my fellow site mates were already sitting in the amphitheater.


After meeting up with Alex and Victoria, Julia and Natasha headed home and we went to have dinner.  We found one of the two Irish Pubs in the city and chatted with the currently serving volunteers that are in Ohrid.  It was a long day but it was the best day I've had since I came to Macedonia.  I was engaged with the locals and their venues.   I was constantly educated by the history, the culture and the energy of Ohrid.  Lastly, I was entertained by the people I was with and the sites I took in.  This is why I travel and why I joined the Peace Corps.  To teach, to be taught and to feel, nay, smell what I've read about for so long. I can't wait to call Ohrid home.
Posted by Logan Monday at 3:18 PM